We are just leaving soup month, but winter is still staring intently at us for the near future.  So- perhaps we need a de facto extension to soup season!  As I have written before, I love soup.  What a better way to fight off a vortex than with a bowl of hunger-sating warmth?  Chef Fabio has some options for soup, as well.  I just defrosted some eggplant chili and some mixed vegetable soup from this summer.  What’s your favorite soup to beat the cold?

Yes, pomegranate in the background…

It’s National Homemade Soup Day!  And there are always plenty of ideas and flavors for soup…

I love soup.  It’s not the first time nor the last time I will say that on this blog.  I enjoy eating different soups as much as I enjoy making soup.  I like that it’s easy, aside from much chopping (sometimes)!  The above picture is of a curried squash and wild rice soup that I made a little while ago with the last of our squash we had from our Community Shares Agriculture (CSA) share.  I often make soups with the abundance of vegetables we get, especially in the middle of summer.  It tends to freeze well for winter, when CSA vegetables are nowhere around.  I tend to use spices instead of salt, almost to the point of under-salting, though the broth adds much of what I don’t.

The recipe turned out fairly well.  I followed some of the comments and caramelized the onions in brown sugar, as well as using tomato sauce for an acid instead of orange juice.  I also upped the curry powder a bit.  I baked the squash beforehand, which made it easy to mix together and used an immersion blender before adding the rice to cook.  We didn’t have any butternut squash left, but some buttercup squash combined with other squash worked just fine and gave it a nice color.  The wild rice (from our Minnesota trip) held up well in the soup and added to the texture.  It was nicely toothsome even in the tasty leftovers.  I would make this again, as we had been looking for some good squash recipes.

There’s no doubt about it, we’re creeping closer to fall.  As Fabio points out, it’s a great time for soup- in this case, Pasta e Fagioli.  Chef Fabio gives a little bean education to help pick the perfect bean.  I like the addition of the fennel. I personally love the flavor it adds as the star in a risotto.  Give the recipe a try! 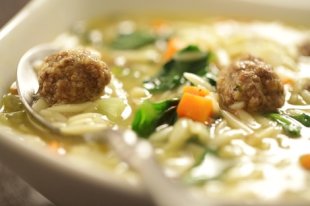 Chef Fabio has another entertaining recipe for us: Wedding Soup.  This is one of my favorites, though I’ve seen a version made with escarole instead of the spinach.  Soup is my favorite food to make; it’s simple to prepare, and you can use any extra vegetables you have on hand.

This Joy of Soup blog, I fear, has progressed into the blog netherworld, with no further updates to be had…  The last post was in 2007.  While the updates have potentially ceased, the site remains a solid resource for soup recipes and other resources.

Soup is the food category I feel the most at home in making.  It’s simple and comforting; a steaming bowl of soup is hard to beat on a cold day.  Soup is adaptable to ingredients on hand and difficult to wreck.  Here’s to soup!!

I made Daikon Rice Soup tonight.  This was a second attempt.  Though the first try was successful, I made some slight modifications.  (I’m not done tinkering yet!  I never am!)

I used more mushrooms and daikon than called for. (The daikon I had were 2-3 times larger than those in the picture!!)  I wasn’t able to find seaweed for purchase anywhere, so that was left out.   I based it on chicken stock previously, but this time I tried vegetable.  Both were pretty tasty.  I omitted the extra salt since the soy and bouillon add enough of that.  My extra add-ins were chives, pepper, and some minced almonds.

The last time I made this, there were some hard daikon pieces that were nearly inedible, so I tried not adding the core portions of the daikon this time (the texture of the core seems different).

For next time?  Perhaps some sesame oil or seeds or some rice wine to the stock… Edit: I forgot about adding shiso/perilla.  I grew some in the garden this year and dried some to save.

Reposted recipe from link below:

Peel the daikon and carrot, and slice into two-inch-long by one-half-inch wide ribbons that are no more than one-eighth-inch thick. Thinly slice the shiitake mushrooms also. Heat the stock in a soup pan with the daikon and carrot, and cook until the vegetables have softened, around 10 minutes. Add the cooked rice, mushrooms and wakame, and bring to the boil again, stirring occasionally. Stir in salt and soy sauce. Eat hot. Partners well with Daikon Pickles. (Note: Be careful not to cook the rice too long; otherwise, it will end up the unappetizing consistency of glue.)

*This Wikipedia and Wikimedia Commons image is from the user Chris 73 and is freely available at http://commons.wikimedia.org/wiki/File:Daikon.Japan.jpg under the creative commons cc-by-sa 2.5 license.