One of the businesses that I truly wish we had in our town is a bakery; sadly, the one that was here closed before we even moved here.  Regardless of our town’s bakery-having-or-not status, we make a point to stop at Oliver’s when we visit Kenosha- and for good reason.  I was initially introduced to Oliver’s goodness via my wife’s recommendation.  While their doughnuts are some of the best quality I have had, they offer a robust selection for those sweet options, as well.  It is the perfect place to visit if you are looking for the classics, but also if you want to consider something less common (they have custard filled, but also are purveyors of a tasty peanut butter and jelly doughnut).  I’ve had several doughnuts, and they are always fresh and flavorful.

Oliver’s is more than just exceptional doughnuts.  We’re also fans of their muffins- there’s a similarly delicious wide selection here also.  I’ve had Kringle from a few different vendors, and I can write with certainty that theirs is also among the best.  Particularly, they have plenty of filling (some other Kringles are rather light on this… and someone should not have to think to discern a Kringle filling or flavor!  Certainly not a problem here- delicious!)

Our recent visit was on a Friday, and we were surprised to note that they also had fried fish and shrimp.  While fish fry in Wisconsin is definitely not a surprise, availability at a bakery definitely was.  While we were there selecting our purchases, several customers came in to pick up both fish and shrimp. Upon noting this to my wife’s parents, we were told that an uncle was known to have driven for hours to get their fish fry.  Oliver’s website (corroborated by my wife’s parents) notes that this has been available for quite a while.  I will have to give it a try next time we are in on a Friday.

In addition to our typical doughnut purchase, we decided to try one of their pies in the refrigerator case- a pecan pie.  It truly was an excellent choice.  The crust was flaky, and the filling was a perfect sweet complement to the nuttiness of the pecans- without being too sweet (an issue I notice quite often with an average pecan pie).  We certainly will be buying one (and more!) again.

If you’re in Kenosha, make sure to stop by Oliver’s. And don’t forget the coupon!

Happy mid-summer from Wisconsin!  Now that we have an additional year in our new space, we’re starting to transform our yard with a variety of new plants as I’ve noted earlier.  It’s a slow, albeit rewarding, process for sure; there’s only so much we can do in a day/week/month, particularly when life and weather can intervene.  The pace also allows for some thoughtful reflection:  I know I’ve re-imagined our layout plan numerous times, but it will gradually fall into place.

We’ve been marveling at all the new flowers- some in the garden and some in the yard, and I wanted to share some Wisconsin summer with you wherever you are…

Runner beans on a tomato cage- something has been snacking on them, unfortunately… 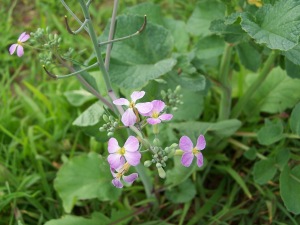 More from the garden- radish flowers 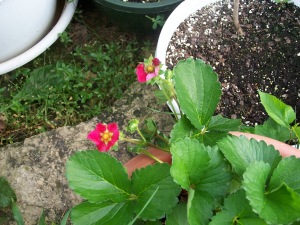 Some Tristan strawberries-to-be (doing exuberantly well in a pot)

Milkweed (We have been pleased to see more butterflies than Monarchs in our yard, as well!)

Non-floral color- a Wisconsin sunset.  Good night to all!

My wife and I had the blessing of quite a bit of outdoor space with the purchase of our new house.  I wasted no opportunity to start our garden this spring.  I had a box full of old seeds, so I wasn’t expecting a true garden of eatin’.  Space was no issue (though I do remember the days that our patio was our garden).  It took a few passes with our trusty tiller to carve out our space.  The previous owners had no garden, so the sod stood in our way.  Given this reality, it has been quite the battle  (as you may note) to keep the weeds out.

I’ve had others tell me that it takes about three years to eliminate some of that, so the tiller will be busy.

One other battle has been with the critters of the area: birds, chipmunks, deer, and rabbits.  All seem to frequent the garden at different times.  We lost most of our peas that were already on the vines, and something has been digging by/eating our potatoes!  I cannot say I have seen that before.  I had a garden out in the country growing up and had seen my share of creatures.  Being near a somewhat large highway doesn’t do much to scare anything away.

Yet another battle has been with what I think is an occurrence of a plant disease.  I mentioned something similar earlier on the blog.  So far, much of our tomato crop is in the process of succumbing.

Whatever it is, it has also affected the nearby clover and a flowering vine.  The tomatoes have all had similar issues- the leaves have turned grayish silver and seem to have stopped growing.  We still have had some tomatoes ripen (though some critters have helped themselves…)  Regardless, we’re not planning to compost any of these so nothing spreads, hopefully.

The weather has been somewhat bizarre.  We had a cool spring, so no early start this year.  We had a steady pattern of rain, but now we are behind for July- and only one day above 90 degrees so far.

On a more positive note, our vines seem to be growing well enough.  More of the garden germinated than I was expecting, but the weeds have kept some of that in check.  The potatoes may hold out if something stops eating them.  The radishes earlier this season were robust, and the cucumbers have been producing.

Thus, there is much to improve on for next year, but a garden is a process- with fun and frustration (emphasis on the fun for me).

What have you planted this year?  Successes/difficulties?

Certain invasive plants and animals receive greater media and government attention (for good reason). In our part of Wisconsin, the Emerald Ash Borer has been one of these species.  Similarly, I recently came across a news clip about giant hogweed as an invasive plant in Michigan.  What I did not realize was the danger in even trying to get rid of it:

This plant is also on one of Wisconsin’s lists, which also include some aquatic and wetland plants.  Invasive species will vary by location, but the potential negative impacts are similar: native species can be affected.  Wisconsin has Administrative Code NR 40, (the invasive species rule) which “makes it illegal to possess, transport, transfer, or introduce certain invasive species in Wisconsin without a permit”.  The counterpoint to this is the benefit of researching, planting, and promoting native species.  As planting season has arrived/is arriving, take a few minutes and make yourself aware of your region’s invasive and native species.  Report any invasives you find.  It could save you and your neighbors some trouble.  And watch out for the giant hogweed!

Chef Fabio provides his take on grilled cheese on Chow Ciao!  An abundance of excellent local cheese is something I am thankful for, living in Wisconsin.  It’s one of those foods that’s a personal favorite, with all the different flavors and varieties.  Fabio offers a cheese primer… I’d also add that reduced fat cheese, while still good in some recipes (to keep flavor and cut a few calories), won’t produce the necessary melting one might hope for.